Columbia Valley Pacific got some Geeps

First generation road switchers are right at home on Wayne Campbell's new (and absolutely magnificient!) Columbia Valley Pacific route. The route ships with an ALCo RS-1 in CVP colors, so I thought why not add a GP7 to the fleet for some more variety?

The route is of course available at RailworksAmerica's File Library.

You can get the GP7 repaints on my website.

And now please stop reading and go and enjoy this fantastic route.

Posted by GreatNortherner at 7:03 PM No comments:

Announcing the BNSF Hi-Line for TS 2020

The BNSF Hi-Line route will soon be coming to Train Simulator 2020.

This new route is a model of the east half of the BNSF Hi-Line Subdivion, which runs straight across Montana's high plains from Shelby to Havre. Its western terminus, Shelby, connects to the Marias Pass route DLC from Dovetail Games, thus completing the entire Hi-Line Subdivision from Whitefish to Havre in Train Simulator.

Rick Grout (G-TraX) and I have been working on this project for several months now and our route is now nearing completion. The Hi-Line route will be a standalone route DLC (it will not require Marias Pass or any other DLC to run) and it will be available worldwide. 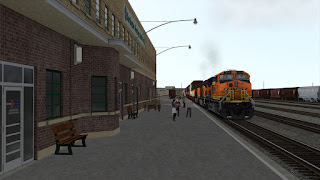 The Hi-Line is a partially double tracked mainline with a high volume of traffic, particularly intermodal and grain traffic. Amtrak's Empire Builder passenger train also runs on this line and stops in Havre and Shelby.

High line speeds of 79/60 mph, the heavy traffic, and a sawtooth gradient profile with frequent climbs and drops of up to 1% make this route a challenge for the engineer. The route's end points at Shelby and Havre offer yards with many switching opportunities. A large and very detailed engine maintenance and shops complex can be found in Havre. Lineside grain elevators at nearly every station along the way provide numerous possibilities for fans of local/wayfreight operations.

Smoothly rolling terrain with vast areas of farmland, small towns and settlements, scattered bodies of water and small remnants of the original Montana high plains vegetation create a unique scenery. Throughout the seasons, the Hi-Line changes its colors and goes from lush green in spring to dry brown in fall, before a smooth blanket of snow covers everything in winter.
Posted by GreatNortherner at 7:56 PM No comments: